skip to main | skip to sidebar

I remember this day last year like it was yesterday. You all shall know that this day last year my BF arrived in Toronto for our first stay together since we had met. The days prior to June 29 2006 I was so nervous and anxious awaiting his arrival. I did so much to prepare for his arrival that I smile today when I think about it. We call this day love @ first sight because it really felt like that. Here are some pics from that day last year.... I also got myself a tattoo today. The Chinese characters for the word "courage", that word just fits this entire experience. 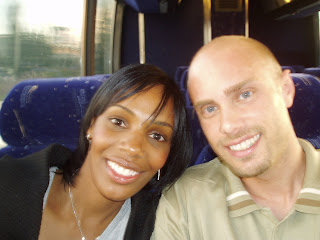 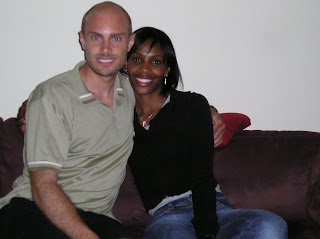 It's an emotional day for me as I handed in my resignation letter today. Acutally I did not end up giving my managers the letter as the whole ordeal was VERY emotional for all parties. I did tell them that I would be leaving but nothing can move forward until I had in the letter. Move forward I mean that HR cannot start the process until they receive a written letter. Here are the details of the meeting;
So I went into the meeting very nervous, heart beating a mile a minute, thinking that this would be easy and quick. Well the meeting lasted 35 minutes which I had expected it to only last 15minutes. I told my managers that I have decide to leave for personal reasons, I didn't feel like telling them the entire story. I don't think I got past the first word and I started to tear up. I think the reason for the teary eyes is that once I did this; quit my job, the move ahead would be official. From here forward the countdown begins, its not all talk anymore. I also teared up because I honestly can say that I love my job and most importantly I love the team that I work with we all get along so well. And of course the fact that I would be making hugh change in the next few months. After telling my managers I had to announce it to my team, which I thought would be the easier part because many of them knew what was coming. Well once again, I didn't even say a word and the tears started rolling down my face. I finally got it together and my colleagues, they were not surprised but realized that my move was the real deal.
As the day progressed it became a little easier to get my work done.
As soon as I was able to I called my BF to cry because I was sad and happy at the same time. He was so supportive and was successful at making me laugh, which helped a lot.
The joy comes from knowing that there will be many happy times when I am finally with my BF.

Oh and he went to the job interview today on my behalf and met with the family. He sorted out my work hours and my daily tasks and of course worked out the pay. He had a lot of good things to say about the family and the children as he was able to meet all while he was there. After discussing the nitty gritty, the woman asked if he had a picture of me. When he showed her my resume she saw that I was black. My BF asked her if that was okay and she said oh there is no problem, the kids have had an interaction with a black woman recently. Chicco did say she was surprised when she saw my picture. She also asked to speak with me on the phone, so I will update you all once I have that conversation with her. The family would like me to work 12:30-5:30 pm Monday to Friday. Those hours work for me and the salary worked out good as then family has money to spear, if you know what I mean.

Well, I got down to it this evening and finally wrote my resignation letter. It's brief, short and sweet. Writing the letter was emotionless and I am happy the writing of it is over. Tomorrow is the day when I meet with my managers so I am have some anxieties about that meeting. I just want this taken off my shoulders, I want to be FREE!

Today was just another working day. It was VERY hot and humid but I got through the day with no problems. Saw my BF earlier in the day and it was a good start to my day. Seeing him is always a good start or a wonderful ending to my day. He will be in Toronto 49 days, we have a lot of plans for when we are together in Toronto. Tomorrow he will go to my job interview w/ the family that wants me to work for them. I don't know how I feel about being a nanny but I am willing to do anything to help out my BF and keep my sanity. I will drive me crazy if I become jobless after working and being independent for the last 5years. It will be a big adjustment making a lot less than what I am making now. When you make less you spend less and this adjustment will be a hard one. I have become used to making and spending my own money and adjusting to the change will be difficult for both myself and my BF. We are strong so I am confident we will work through whatever situation comes up.

See you later alligator.
Posted by Ms. FoxyRoxy at 9:11 PM No comments:

Why am I having a hard time drafting a resignation letter? I don't know what to say, its hard writing this letter because I really love my job. I am also very anxious to meet with my managers on Thursday. I have a couple more days to formulate something so I am going to go ahead an procrastinate some more.
I read again today to my BF, he was very supportive w/ my butchering of his lovely language. Counting down the days until I pick up my visa, I am so nervous that the consulate will change their minds. Can you imagine I showed up there and I was denied after I was told I was approved and given a pick up date. I would be so sad but not for long because nothing will stop me from being w/ Chicco. I am staying positive as that's all I can do. My BF is going to a job interview for me on Thursday for a nanny position. He will meet with the family that wants me as their nanny and he will negotiate my salary and work hours with my input of course.
Still enjoying my new bb even though my right hand is killing me. I seriously need to get myself to the physiotherapist.

See you later alligator!
Posted by Ms. FoxyRoxy at 8:10 PM No comments:

Today is a good day as I got me a new toy. Like I stated in my previous post, my addiction to the blackberry is something else. The newest blackberry came out today w/ the cell company I am with and I was one of the first to have it. And am I totally lovin' it? oh yes I am. 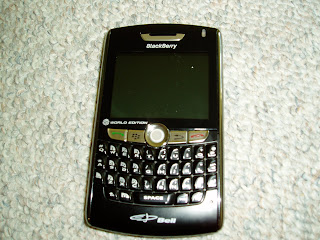 Besides the damn heat wave in Toronto nothing new is happening. I decided not to go to kickboxing tonight because I am tired as I did not sleep too well lastnight. I laid down to sleep at 930pm and was still awake at 130am, why you ask? well ANXIETY is the only word.
This week I am meeting w/ my manager to give my resignation letter. I was thinking lastnight what exactly I should say in the letter and tyring to figure out the perfect speech. I am feeling the pain at the moment in my eyes as I am VERY tired. I am trying to stay awake as late as possible so I can get a decent amount of sleep tonight.
My Italian tutor had to cancel today because her mama is sick. So I had my lesson today w/ my BF, which was funny because I am sure he was thinking "this girl reads so slow" and I really do.

So do I not honestly believe I am suffering from CTS. Why? well I am addicted to my blackberry. I have had one for many years and have found over time my use has become excessive. Many of my friends have one so that must be the reason. It has allowed me to communicate with them w/out having to speak with them. Sometimes you don't want to talk but sending a quick PIN saying "hello" is all what's needed to keep in touch. I am currently waiting for my new bb which I will bring w/ me to Italy. My phone company is charging 500.00 to terminate my contract so the BF and I decided that taking it w/ me will be the best option. I will be able to use a local SIM card while I am there and send PIN/email messages. So back to the self diagnosis of CTS. I have cancelled 2 appointments with the physiotherapist due to scheduling conflicts. I will eventually make it there but until then I suffer w/ the pain and continue typing away on my crackberry.

I can't believe he will arrive in 55 days. Things are moving along as planned for the big move in September. My BF found us a lovely apartment which he will sign the contract for this weekend. I am excited to live outside of his mother's home and also not a stone throw away from his mother's home. We will be living in newly developed area w/ many new homes and apartments. I pick up my visa in 10days, a student visa is what I applied and have been approved for. I have to tell all about getting my student visa but I have to officially have it in my hand before I share the secret;). In a matter of 9 days I will officially provide my employer with my termination letter. Gosh what am I going to say in the letter? How will I present it to my team? (shouldn't be hard as the majority of the know). Leaving my job will be the hardest part as I truly love my job and the people I work with minus one person (keep that one the down low, just in case). Everything is coming into place, in just a matter of months I will be LEAVING ON A JET PLANE......can i get a A-Flickin-Men.....Don't know what else to tell you all but I will definitely post more.